It snowed the Friday night before deer hunting, the roads were horrible, and that’s when Honey decided to have her pups. The first one, Dorothy was born about six as I was talking to my mom, Dorothy on the phone. There were two more by about 9, then nothing. I stayed up with Honey all night. She had one more about 3 AM that didn’t make it and then no more. I could feel at least two more puppies still inside. Went out to the deer stand for a little at daylight and then came back and called the local vet as soon as they were open.

Honey needed a C-section. They could not do it there. It was Saturday. Said I would have to go to the emergency vet clinic in either St. Cloud or Fargo. I thought “Screw That!” and called the Litchfield Vet Clinic. They said Bring Honey right in. One problem, I said. I am about 2 1/2 hours away. When I called the Litchfield Vet Clinic back a few minutes later, after I had time to think while I was getting a pot of coffee for breakfast and running around getting ready for a road trip they said You can bring her to our clinic in Watkins. It will be a little closer for you and I already called them and set it up.

It was just after noon when I walked into the Animals Inc. Vet Clinic in Watkins and a tall young lady veterinarian in a stocking cap and cowboy boots said Bring Honey in and we will take care of her. It wasn’t long before we had four people besides myself working to try and save Honey’s puppies. One of Honey’s tubes had emptied out but the other one had been blocked by a big pretty male puppy and there were three others behind him that could not get out on their own.

We worked and worked but we were unable to save any of those four puppies. I think the vets tried harder to save them and were more sad about losing them than me. Honey slowly came awake, pulled the breathing tube out and started taking care of her three puppies that she had left.

I made the long drive back up north, got Honey and family settled in, had more coffee and a deer stick for lunch and headed out to the deer stand. When I got in at dark, cold tired and hungry, my brother told me that Ace from Ted & Gens had stopped by while I was gone and left a whole bunch of his famous ribs with barbecue sauce. Ace had bought some hunting land back behind our place and comes through the yard from time to time. Man, were those ribs good! A plate full of those with some fried potatoes and a couple beers and I laid down in bed and didn’t move until Tim was yelling at me to wake up to go deer hunting the next morning.

Seems like for me anyway, when things get tough there are always angels around to help you get through it. Not sure where I would be now without them.

Honey and her three little girls, Dorothy, Toto and Glinda are all doing well 🙂 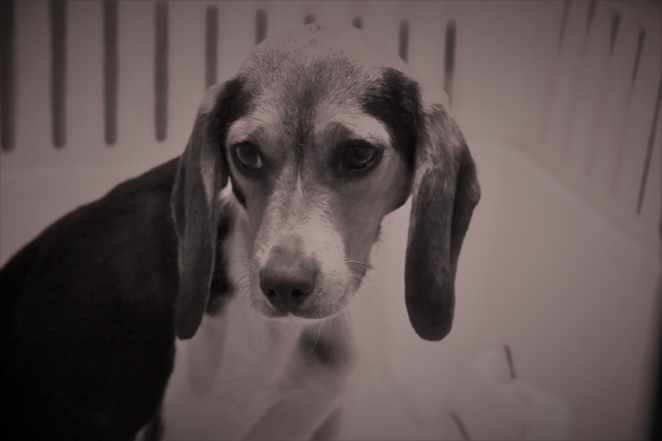